A trip under the sea with The Nephews...

The other day, Big Nephew (7) and I did a bit of sketchbooking together.
The night before I had started to doodle an underwater scene and that inspired him to draw one of his own.
We spent a good hour getting engrossed in our pictures and both decided that we'd quite like to have a pootle about under the ocean in our very own submarine. It would have to look like this one though and I would insist that we both wore fetching red hats (even though my ears stick out too much for me to wear those sort of hats usually..)

These are the results of our sketchbooking session.

Here's Big Nephew's busy underwater scene*. Can you spot our submarine? the the broken up pirate ship? And the message tucked into a bottle? And all the pirate treasure floating about? Looks rather exciting I think! 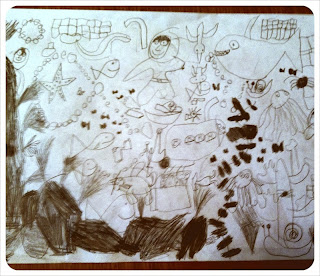 And here is my effort. This scene features Big Nephew and his brother Little Nephew. 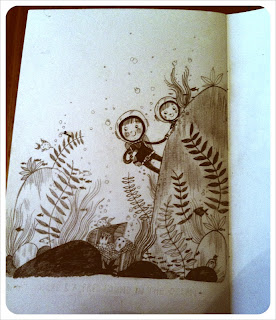 If this were a scene from real life, I don't think they would have found the treasure at all. There would have been so much jumping into the sea, I doubt very much that there would be time left for them to go exploring at all. This I know from experience at the swimming pool...

Here's my picture all coloured in: 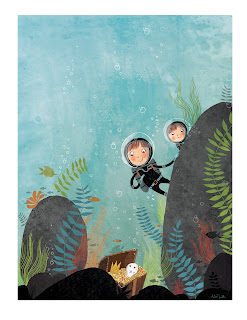