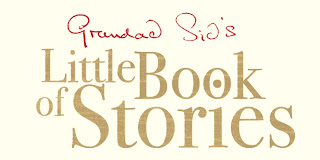 I thought, by way of thanking you all for the kind words and touching comments made on the post about my grandfather, I might post and illustrate one of the stories he wrote for me. This story is called Joseph's Adventure and it stars a big brown bear I got around the time I played Joseph in my infant school play ( aged 4) - hence his name.
This was my favourite story in the book as it combined all of my favourite things - night time adventures, snow, cardboard boxes ( I was very keen on playing in these as a child) and fish and chips!
I hope you enjoy it....
Joseph's Adventure
By S. R. Thomas

Joseph, the brown bear, was bored. He wanted some excitement.

“I must go on a journey,” he told himself, “That’s what they do in stories when they want to have an adventure.”

That night, as it was beginning to grow dark, Joseph looked round the bedroom. All the toys were asleep. Padding quietly, he crept out of the bedroom, went down the stairs and into the night outside. He shivered just a little as a few flakes of snow fell on his face.

“My thick fur will keep me warm,” he said.

He gazed about him. The bright orange street lamps looked pretty. The lights from passing buses were even prettier. Yet more exciting were the shop windows which were lit up. He looked into a toy shop and lingered at the window of a sweet shop. He stared at the good in a shoe shop and wondered how humans could wear such articles on their feet. 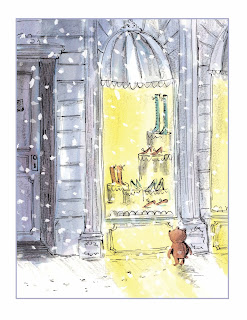 He walked quickly as the snow fell more heavily.

Suddenly he was aware of a warm, appetising smell. As he sniffed he realised that he was hungry. The toys back in Alexander’s bedroom would be enjoying a midnight feats now. He wished he was there but he had to finish his adventure.

The warm appetising smell became stronger. Joseph stopped and looked up at theewindows of a fish and chip shop. He wished he could go inside to buy some, but he had no money. Anyway, they wouldn’t sell fish and chips to a teddy bear...

He walked on. He was feeling very cold. A passing lorry threw up wet, slushy snow which plastered his thick fur.

He stopped walking and looked about. Where was his home? He had been so busy looking at all the sights that he had not noticed where he was going.

He was lost! He was about to panic when he remembered his story books again. When people were lost in the snow - in stories - they followed their own footprints back home.

That’s what he would do - but his footsteps had vanished. The snow, which was falling fast, had covered them.

“I really am lost,” he said sadly, “ What am I to do now. Perhaps someone will recognise me and take me home.”

He shook his head. That was a silly thought. No one outside of Alexander’s bedroom knew him.

As he stood wondering what to do he noticed that the traffic was no longer passing by. There were no people in the street. Lights were going out in the houses as people went to bed.

“They are all warm and well-fed and comfortable,” said Joseph miserably, “ I’m cold and tired and hungry - and lost. They are all in their cosy beds.”

Not knowing what to do, he wandered about until he arrived outside a bicycle shop. Near the door was a large, empty cardboard box.

“If I go into that I might be able to keep warm,” he muttered.

But he was wrong! All night he huddled inside the box - and all night he shivered.

“Even my thick fur won’t keep out the cold, ‘ he clattered.

Finally, after a very long night, daylight came. As he peeped out of the shelter Joseph saw a man approaching. A big blue bag hung from his shoulder.

“A postman!” muttered Joseph. He became excited. “ It’s the postman who brings the letters to Alexander’s house. Now I know what to do!”

He crept out of the box and stretched his cramped limbs. Then he watched the postman making deliveries. Carefully, he followed the man.

Soon they were outside the gate of Alexander’s house. While the postman searched for letters in his bag, Joseph crept past him. He hurried to the front door and waited.

A moment later the postman walked up the path.

“What have we here?” he said when he saw the shivering teddy bear, “You look as if you could do with a warm!”

He rang the doorbell. When Alexander opened the door the man nodded towards Joseph.

“Yes,” said Alexander, “Thank you for letting me know he was out here.”

He picked Joseph up.

“ I wonder how you got out and where you’ve been,” he said, “ Wherever it was - I’m very pleased to see you back again. Now you must come and get yourself warm.” 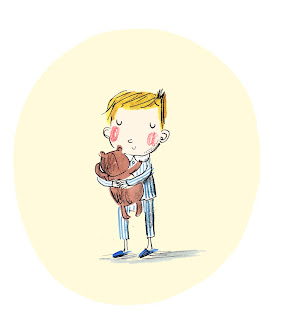 To see larger versions of the illustrations please go to my flickr page.
Posted by Alex T. Smith at 15:18